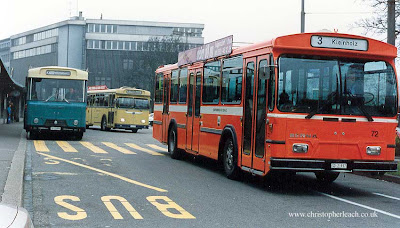 The first time I really got to have a good look around the German part of Switzerland I still didn't know where I might find Regie Post Buses and I travelled more with a feeling of hope than purpose. Now looking back that seems no bad thing for the Post Fleet was not that varied or interesting when one considers that Swiss manufacturers were still dominant on the streets and there was a wealth of interesting trams, buses and trolleybuses waiting for me and some even dating back to when I was at school in the mid-Sixties. A good example is Olten a town one might just pass through on the train but here not only was the famous Berna bus and truck manufactured, buses still carried the proud marque. I expect the Swiss Orange nearest the camera, as I call them, was just a mundane Saurer badged as a Berna for there were not a lot of new one's about and it seems they stopped producing them in 1979. But the cream and blue bus still thankfully in traditional Olten colours no doubt was the real thing and I was lucky enough to see this Hess bodied bus at the Geneva Motor Show in 1964..
Posted by christopher at 12:10