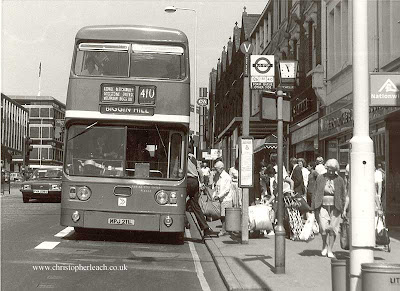 Now a part of the National Bus Company a keen operator of the double-decker Midland Red ordered it's first batch of I think it was 90 Leyland Atlanteans having previously prefered the Daimler Fleetline. Sadly the Atlanteans were divered elsewhere and in future the company was forced to take large numbers of the Leyland National instead. Of the Atlanteans Merseyside PTA took the Alexander bodied examples whilst Maidstone and District and London and Country had the ones by Metro-Cammell. A Godstone vehicle AN 111 is pictured taking on a decent load at bromley.
Posted by christopher at 12:21