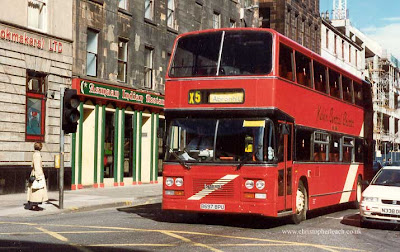 In Britain double-deck coaches for express services were all the rage in the Eighties and Leyland also took a share of this market when it extended the wheelbase of it's Olympian bus and gave it a more stylish and comfortable ECW body for the NBC Operators with commuter services working into London who no doubt welcomed the extra seating capacity. Following deregulation and Privatisation of the NBC Companies there seemed to be a sharp decline in coach work as the new owners lost interest in it and concentrated their efforts on the highly competitive but potentially more lucrative stage carriage market. However many of the redundant vehicles were not sold off but were moved instead around the country where they started doing similar work but looking very different in the colours of new operators within the same group. This 'First' Kelvin example seen in Glasgow came from Eastern National who ran coaches in competition with Southend Transport into London along the A12 corridor.
Posted by christopher at 15:12