Who would have thought it.... 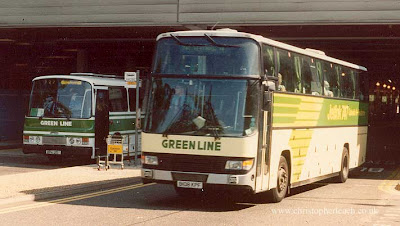 When I took a photograph of these two Green Line coaches at Gatwick Airport in the mid-Eighties I would never have guessed that in the next decade both vehicles now owned by British Bus would be rebodied by East-Lancs as single-deck buses and form part of a fleet of these vehicles allocated to Midland Red North at my home town of Stafford. The Berkhof bodied coach nearest to the camera became 1728 and the shorter one by ECW became 1715.
Posted by christopher at 07:44