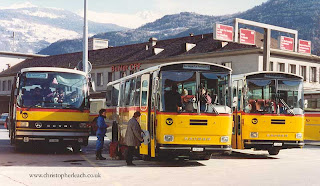 As winter the cold weather and the thought of snow approaches I think about Switzerland again as after Christmas was the time when I took a holiday there. Sion is one of my favourite places as it was one of the few places I managed to take a proper look at a decent number of PTT Regie fleet during my schooldays nearby in Vaud. In the Sixties many of the buses were FBW C40U Alpenwagens but there were older bonneted Saurer's too but these were a far cry from the sophisticated Saurer RH's to be seen in the Eighties and Nineties. P24412 and P24416 were amongst the last Saurer's built in 1985 as both Saurer and FBW sold out to Mercedes-Benz who continued the Swiss tradition with hybrids under the marque NAW from Arbon.
Posted by christopher at 09:15