A bus in Widnes: Making something from nothing 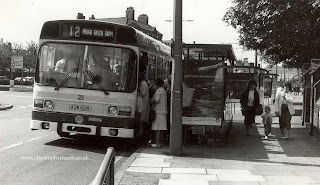 As a young enthusiast I took lots of record shots but as time went on I looked more and more towards taking slightly more interesting views with my buses in them. Here is a perfect example of how with a little care and patience one can capture far more than just a rather mundane Halton Transport Leyland National half hidden at a bus stop. Taken against the sunlight the way the shadows fall allows the street furniture to draw the eye across to what is also happening as people approach. Widnes Corporation was traditionally a Leyland operator, but after buying some Leopards for 'opo' Leyland powered Bristol RE's took the stage. But later when they could no longer buy these not did Halton become an enthusiastic buyer of both National mark1 and the National2, it also liked the much derided Lynx. No21 ACW 21R was seen in the town in the mid-Eighties loading for Hough Green Farm, or rather I expect a housing estate built on it.
Posted by christopher at 02:17