A Daimler Fleetline in coventry 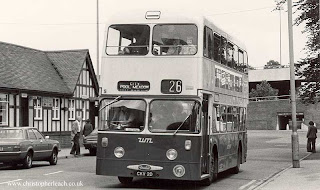 This style of East Lancs bodywork on the Daimler Fleetline appeared on buses of Warrington and Coventry but in an odd sort of unusual proportions 'East Lancs' way I found it quite attractive. CKV 2D was No.2 in the Coventry fleet but after the formation of the West Midlands PTA a local Y suffix was added so all the various fleets didn't need to be renumbered. The last letter was chosen instead of the first as three of the five towns started with W.
Posted by christopher at 15:02