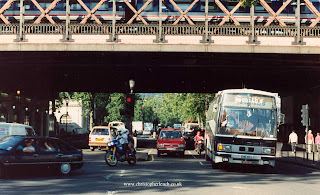 To preserve the monopoly of London Transports Green Line cross-city limited-stop stage services there used to be a restriction of a about thirty-fives miles preventing rival operator's taking it's commuter traffic. With Deregulation this was more than halved to fifteen miles which was more or less the urban boundary of the M25. Consequently many old fashioned Green Line stage services were replaced by faster workings from other former NBC operator's wanting to expand plus others like Reading and Southend who sought to provide a regular service throughout the day. Better train services and the congestion have killed a lot of this off but Independent's did much better with more flexible commuter services particularly along the M40 and M4 Corridor plus down the M2 from North Kent and the highly populated Medway Towns. This Plaxton Paramount bodied Leyland Tiger B46 XKJ of Smiths of Sittingbourne could regularly been seen picking up for the homeward journey along the London Embankment in the Nineties.
Posted by christopher at 01:37