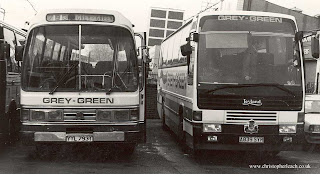 As they say oak trees grow from tiny acorns and when the car dealership Cowie bought out the London coach operator George Ewer it quickly found it's way into the much more challenging yet rewarding Deregulated bus market. A few years later the slightly bigger Cowie Group changed it's name to Arriva, but few would have guessed anything so unlikely as this mushrooming effect looming when I photographed examples of Grey Green's then standard choice of Leyland and Bedford chassis in about 1983. Like other important Leyland strongholds as well as the new Tiger an upmarket Royal Tiger Doyen or two was tried but without gaining any orders as like many others once content with buying the trusted Leopard the less reliable and poorly thought out Tiger was one spanner in the works too many as the sensible way to proceed was with ultra reliable Volvo. It's just such a pity coaches like Doyen A839 SYR seen at Stamford Hill Depot weren't as good as they looked whilst the also popular Duple bodied Bedford YYL 793T was also nearing the end of it's breed.
Posted by christopher at 16:49

Remember Driving both these Coaches! lol, I'm apart of History!

It's Great seeing theses Pictures again, Have a Facebook page

GreyGreen Coaches look it up..

Yes work there for years repair them .howard