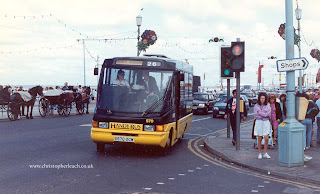 Blackpool is so well known for it's fleet of fabulous still operational historic trams and older buses that elsewhere had almost all gone plus an individualistic buying policy that once typified the progress Municipal fleets. Hardly surprising then that these short lived little Handybus minibuses like E570 OCW are so easily forgotten. At one time as in much of Lancashire the mighty Leyland Motors ruled here but with it's gradual demise a new favourite supplier came along in the shape of Optare. Even though it now has very little in common with the old Leyland it is one of it's few surviving children as the company was born when the former Charles Roe bodybuilding business in Leeds was privatised with the sell off of British Leyland that had swallowed up the proper Leyland. Optare quickly evolved into a manufacturer of modern but not over-sophisticated operator friendly complete buses. This seaside town has bought a number of it's single-decker ranges and especially the splendid Delta, but now probably forgotten were these eye-catching early minibuses based on a VW which even though not successful showed that minibuses need not look like bread vans. This model was quickly killed off when Optare took over the bus busness of MCW and instead put it's efforts into that manufacturer's to become very successful Metrorider which rather looked like this tiddlers bigger brother. So it was to become something of a rarity only really be found in small numbers in parts of fashionable London and of course here running alongside the trams and other gems here in Blackpool by the sea.
Posted by christopher at 01:49