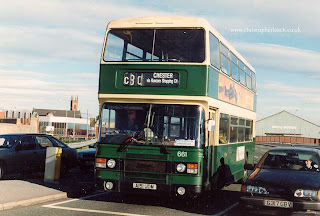 At Privatisation Crosville was split into two with one part still called Crosville whilst the western part became Crosville Wales. The English buses quickly adopted a rather unpleasant deep orange and dark green livery, but the orange was quickly replaced by a much more subtle cream whose effect at first glance reminded one of the old Maidstone and District.colours. By the time in the Nineties when ECW bodied Leyland Olympian A151 UDM was photographed in Warrington the English part of the old company had been split yet again with PMT buying the Chester and Wirral operations. Totally unrelated to the old North Western what was left of Crosville in Cheshire joined North Western whose name had been reused to go on Ribble's former Liverpool empire which was also owned by British Bus..
Posted by christopher at 08:03