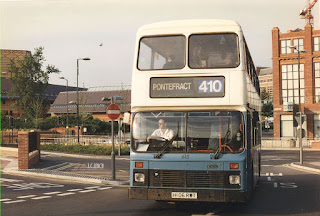 The Pontefract Independent South Yorkshire not to be mistaken for the much bigger South Yorkshire PTE was a familiar sight in Leeds for many years and when Drawline bought it like their acquisitions in the same area of West Riding and Yorkshire Woollen District it was allowed to continue in a grouped  version of it's old dark and light blue and white livery as seen here on a Northern Counties bodied Olympian their usual choice in later years. Of course operating about twenty-four vehicles it was tiny compared to the huge PTE with the same name but it had been around since 1929 having been part of Bullock of Featherstone.
Posted by christopher at 16:40

West Riding et al were the Caldaire Group, don't think they were ever Drawlane as it had been renamed British Bus before getting hold of Caldaire. Did indeed end up in the amorphous mess that is Arriva, though at least it's not First.

All these 1990s groups with strange and ever-changing names was confusing, wasn't it?

Google suggests that Caldaire only owned South Yorkshire RT for a year before they sold out to British Bus, so the Caldaire livery was fairly short lived and a good catch by you!

Thanks Ross, yes so much happened it's easy to miss bits out or get it in the wrong order. I'm not sure if I got any more in these colours as a lot of the buses were still in the old livery.