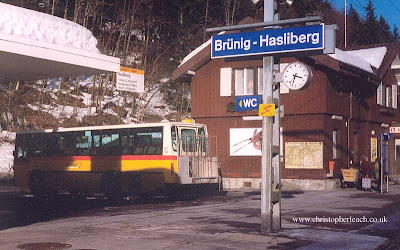 I know it might sound silly but I had a lot of fun going on holiday and trying to see every PTT Regie Post Bus in Switzerland. Sometimes I'd travel all day and still not see the one I most wanted and it was even more difficult because of not speaking the various languages very well. I did discover however that the last bus I needed at that garage NAW Number P24425 was always out-stationed away from the town of Meiringen up the narrow-gauge railway at Brunig. However I didn't want to waste too much time by alighting the train at Hasilberg where it could be found anyway but it was just my luck that every time I went through there I was always greeted by a sister bus. In the end I had to make the extra effort and leave the train to finally spot it but to my utter amazement within five-minutes it turned up working my connection down to the little garage. But it did take me ten years to see it and by this time in 2000 it had lost it's P-Number as all the area operations had passed to two nearby contractors and so it had gained a BE for Bern, canton plate. To celebrate my conquest I had to take an unconventional photograph because the direction of the sun was wrong. Actually to say this was the last of it's type I needed isn't quite correct for another one P24434 was sold before I had chance to see it at Uznach and I lost sight of it.

You can see a better view taken here of one of these buses when it was still new and other Post Buses on my website gallery. .
Posted by christopher at 12:51