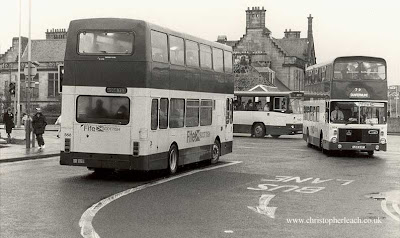 So far I haven't posted any photographs taken in Scotland so it's about time I put that right. When I used to drive long distances the towns in Fife were regular destinations and I always had a soft spot for the smart red and cream Alexander Fife fleet. When Volvo opened it's factory in Scotland it marketed it's buses as Ailsa but by the Eighties operators were buying them as Volvo Citybuses. Also in this scene taken in Dunfermline is a Leyland Tiger which like the two double-deckers also carried bodywork by Alexander.
Posted by christopher at 15:52