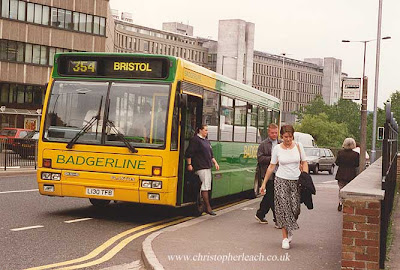 Badgerline's operations in the Bristol area were split into two with a red blue and yellow Bristol Citybus fleet and this attractive green and yellow livery for the Badgerline country services. Even though this was marketed as the Badgerline the group owned a number of companies and most acquired a large number of Dennis Lance's with Plaxton Verde bodywork. What was nice for the transport photographer is that vehicles used to pause to unload their passengers before entering the darkness of Marborough Street Bus Station like No.130 viewed here in the early Nineties
Posted by christopher at 07:28