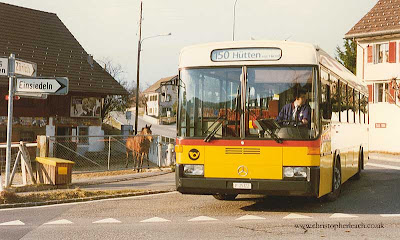 I went to school in Chesieres-Villars overlooking the Rhone Valley in Switzerland. Fate had it that there was a tiny garage with two yellow post buses right next to our school and it became a focus for me enthusiasm. I dreamed of seeing all the Post Office owned P-Reg post buses but even though I was there almost three years I only saw fifty. But that was hardly surprising as not only were the vast majority as far as I was concerned a long long way away, many were housed in the sort of dead-end little sleepy villages no-one would normally visit like the eight at Huetten. However I might have seen one as our train raced through Waedenswil but I would never have been able to read the number.
Posted by christopher at 09:12