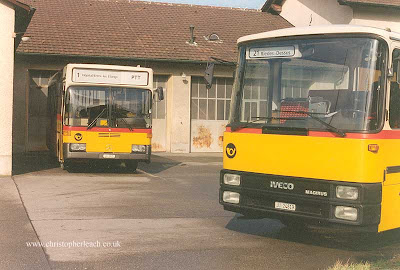 I don't suppose anyone would want to publish a book on Swiss Post PTT bus garages except perhaps myself for they are usually fairly functional. But I'm glad I visited a lot of the old ones like Delemont in The Jura Region so that I could visualise the scene during my era when I was at school here in the Sixties. By the time I took this photo in fact all the true PTT buses had been moved into a spanking new garage a little further out of town on an industrial estate. For a time the local Post Autohalter contractor Mercay moved in to the old garage before finally selling-up and being absorbed into the main fleet along with some of the vehicles including the Mercedes midibus seen here.
Posted by christopher at 05:41