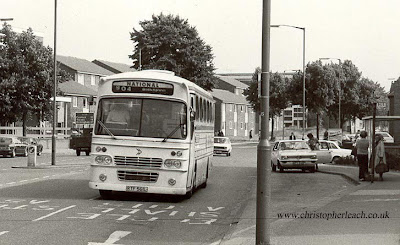 Formerly No.701 in the Ribble fleet this Leyland Leopard PSU5/1R with unusual looking Alexander bodywork became North Western No.1200 in 1976 and it was not exactly a frequent visitor to Stafford, so I was lucky to get this picture when I was out taking something else. It's bodywork had been heavily influenced by the American Greyhound Coach etc.. and it was exhibited at the 1972 Commercial Motor Show. It looked rather drab and out of place in NBC white but a whole load of far more colourful and impressive examples of the 12m M-Type plied the Scottish Bus Group's overnight London Services
Posted by christopher at 07:51