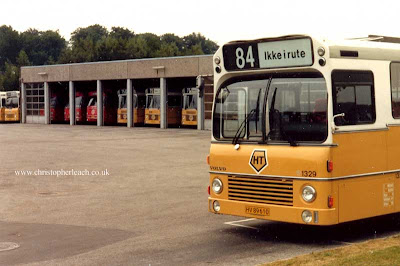 This view taken one Sunday Afternoon in 1982 with everything neatly in it's place sums up Copenhagen's HT 'Country Fleet' as the standard bus was the Aabenraa bodied Volvo like NV 5b 1329 delivered the previous year. Also in stock were a few attractive former DSB buses still in red and built by the same manufacturers. DAB Leylands were a rarity in the outer District 4 but there were two batches of articulated buses including the first one's of 1976 which would be busy working again tomorrow on the No.75 Peak-Hour express service between Holte and Copenhagen.
Posted by christopher at 08:57