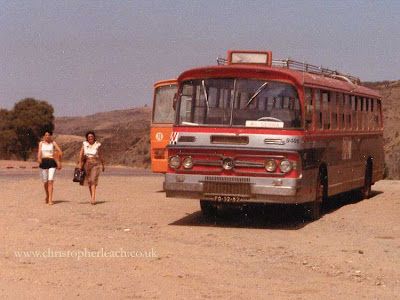 Maybe this was Tomar, but if not, definately not far away. Probably too old to be painted in the mundane orange and cream colours of the state owned bus operator RN in Portugal, I was taking a picture of this faded and dusty, yet magnificent example of Portuguese flamboyant coachwork when two attractive women dressed in white appeared through the heat-haze from out of nowhere over the rise. It felt like a minor miracle but no I was not at nearby Fatima where we had already stopped on our Cosmos Coach Tour. After I had taken the picture of the old Volvo I looked over the hill and there was a whole new village nestled down the ravine.
Posted by christopher at 09:23

I still remember these buses, they were so comfortable but so hot in the Summer. Thanks for the memory!

Hi Miguel, thanks for leaving a message it makes all this blogging worthwhile. Yes even though many people look down on transport photographers as being anoraks we record a part of everyday history that is worth preserving. Why should be go on holiday and all have to photograph the same old churches and sunsets. But it helps if we can take interesting photos to start with.

Chris, this isn't at Tomar.
I think it's Mertola, in the Southern Portugal.