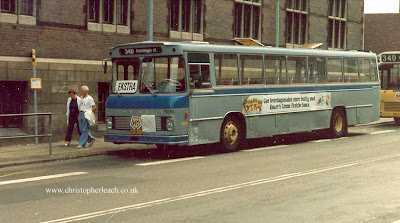 Although takeover's are rather a sad business for the enthusiast they do often bring some interesting variety to large standardised fleets such as when the new enlarged Copenhagen area authority called HT on it's formation inherited a number of these VBK bodied Volvos from Helsingor-Bussen in 1974 and No.5019 dating from 1971 was still wearing it's former grey livery when photographed in 1982.
Posted by christopher at 11:49