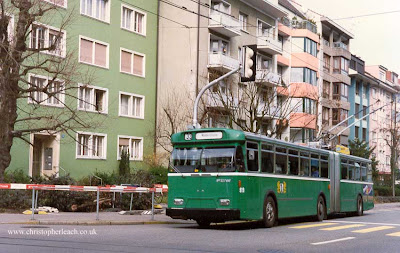 The future of the trolleybus system in Schaffhausen on the Swiss-German Border still hangs in the balance but nearby in Basle following a public referendum it has been decided to replace the eleven Neoplan trolleybuses with gas powered buses later next year rather than to invest more money into the network extending it. When I took this photo in about 1996 one could still see a previous generation of Hess bodied FBW trolleybuses dating from 1975 (911-920) still hard at work.
Posted by christopher at 11:31