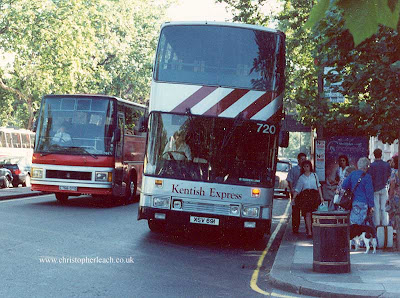 I used to go down to London for the day on a regular basis but I have to admit that apart from fleeting visits I haven't been there for years. A favourite haunt in the afternoon was along the Thames Embankment as a constant stream of Independent and former NBC Operators came along collecting tired commuters for the evening return journeys to their dwellings in the greener Home Counties. Double-deckers featured too and Kentish the former part of London Country based in Dartford worked the 720 Green Line Service using amongst others this former MCW Metroliner demonstrator which was originally painted in Scottish City Link colours and registered TSX 1Y.
Posted by christopher at 11:20