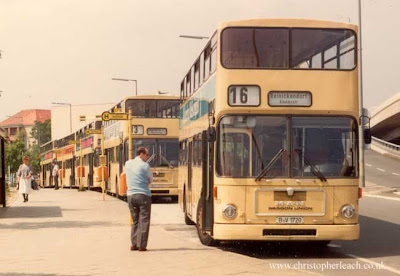 One thing hasn't changed since the mid-Seventies when Bussing was absorbed by MAN and that is apart from sightseeing buses all the Berlin operator BVG's double-deckers are manufactured by that German manufacturer. As has happened in British cities too they are no longer so widespread these days as apart from a few important trunk routes their operation is far more concentrated inside the more populated central zones. However a few can still be spotted in Spandau but things have changed considerably since this view of No.1725 a 1980 Wagon-Union bodied bus was photographed when just a few years old heading an impressive line-up of similar vehicles enjoying a lunchtime break.
Posted by christopher at 05:42