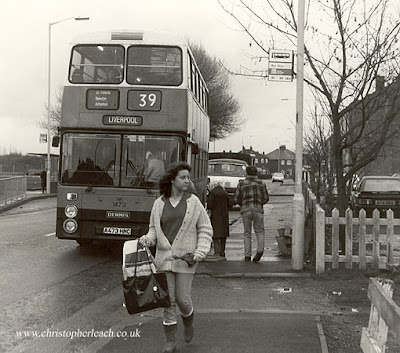 Many of us have fond memories of Lancashire United Transport but even though it could proudly boast that this big operator was once the second largest Independent bus operator in Britain after West Riding in Yorkshire, squeezed between the vast empires of Ribble to the North and Crosville to the South it seemed to have no real operational heart sharing most of it's patch with the local Municipal Operators such as Salford, Wigan, Leigh, St.Helens and Bolton. Working many longish trunk routes probably the best way to visit it's patch was to explore the ribbon of small towns either side of the East Lands Road which runs between Manchester and Liverpool. In the days when it ran trolleybuses it's was known as South Lancashire but South West Lancashire might have been more apt. Not far from Farnworth was where I spotted this rarity, one of three Dennis Falcon double-deckers supplied to the Greater Manchester PTE who absorbed LUT in 1976 and who allocated them to the former main depot at Atherton. One didn't often see these Northern Counties bodied buses on the road as the crews didn't like driving them.
Posted by christopher at 05:21