Berna and Saurer in Sion 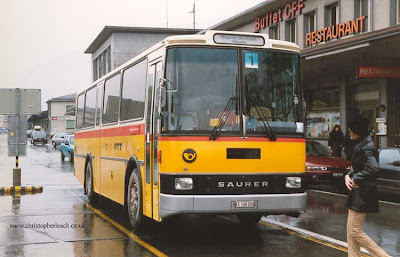 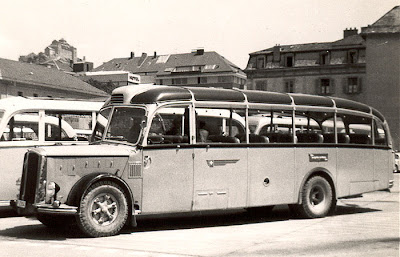 When I first visited Sion in 1964 the PTT Regie fleet had three of the well-known bonneted glasswagon buses, these being Berna L4C Alpenwagen 111a buses P23152-4. The last of which is seen here at the Railway Station. By the end of the Nineties the old Swiss buses had almost gone and I'm glad that despite the awful weather I took one last photo of still smart looking Lauber bodied Saurer RH bus VS 106 000 because the next time I came it was a Mercedes standing in the snow. The Saurer was one of a pair delivered to a local PAH in 1984 just before Saurer ceased manufacturing buses.
Posted by christopher at 04:02

Very nice, I recognize the bus that I often take to go to Veysonnaz via Les-Mayens-de-Sion!