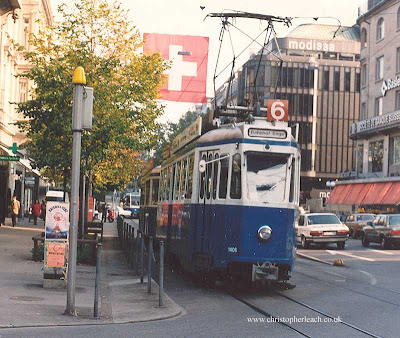 I have to confess I'm not an expert when it comes to trams but I do quite like them especially the older machines, and of the one's I've known this series of vehicles built in about 1949 for VBZ of Zurich really caught my imagination. As they went along you could really hear the inviting singing sound of the electric motor and there was also the rumble and drumming of the metal tyres which also squealed as if in pain on the bends. Lastly not to be forgotten was the comical distortion on the driver's megaphone which made it sound like it was a Dalek telling you we had arrived at 'Central' and 'Bellevue'.
Posted by christopher at 11:15