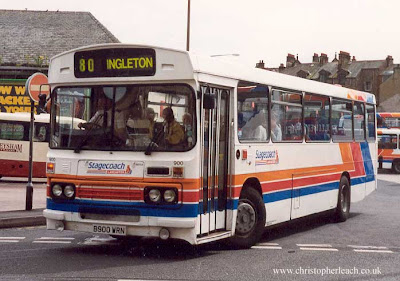 In 1983 as part of the NBC Midland Red North took nine of these Duple Dominant bus bodied Leyland Tigers but the tenth vehicle was diverted to Ribble where it could be seen working in Liverpool. However by the Nineties it had been moved by it's new owner to Lancaster and it says something for these pleasing looking buses that it still managed to look okay in those much hated 'Stagecoach Stripes'. Apparently as the saying goes the design was originally done on the back of a cigarette packet and one can quite believe it. As time goes on I've become quite fond of it but maybe that also has something to do with nostalgia for older buses like this.
Posted by christopher at 15:49