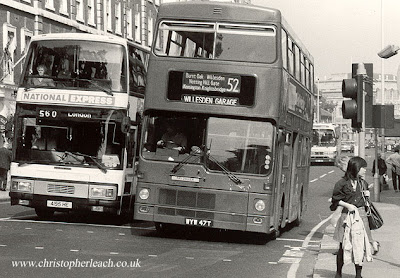 If you're looking for bus and coach variety in London you can't beat Victoria which can not just boast some good and interesting vantage points it is served my many bus routes and attracts coaches including of course those many National Express Services heading for the busy Victoria Coach Station. M47, one of London's first Metrobuses is about to be overtaken by a Yorkshire Traction Neoplan carrying Plaxton bodywork. YTC was notable for giving it's coaches cherished registrations but at least they tried to make the numbers match like No.95, C95 KET which became 4195 HE.
Posted by christopher at 08:28