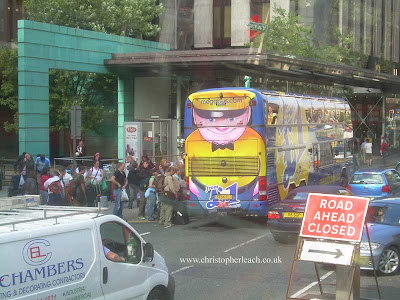 The mighty Stagecoach Holdings successfully experimented with special budget fare operations firstly here in Manchester to counter University Bus who was creaming off it's cost conscious student passengers with old buses on the Didsbury Road Corridor and Stagecoach's reply the fleet of time-expired all-over blue buses called Magic Bus have become something of an institution I believe. The cheap fares Magic Bus concept was also used when Stagecoach copied the providers of cheap air flights like Easy Jet with bookings taken over the Internet when it started offering almost free travel between Manchester and London. It has certainly given National Express something to think about and not only were the old double-deckers used on the no-frills service a great success Megabus now run brand new dedicated coaches on it's various routes including three axle Volvo's and Neoplan double-deckers like this example preparing to depart from Manchester.
Posted by christopher at 09:01