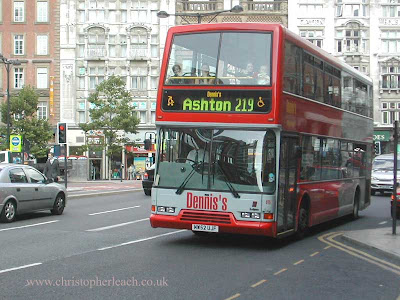 It's sad to hear that what I used to call East Lancashire Coachbuilders have called in the receivers for they were one of a number of smaller concerns who traditionally built tiny batches of vehicles or even one and would try to add many customer details. Not surprisingly like similar Massey Brothers and Northern Counties also based in Lancashire they were a favourite with the smaller Municipals and more affluent Independents who could afford new buses. Sadly not many towns have their own buses these days but East Lancs could still be found on some of our favourite private family owned concerns like Mayne of Manchester and The Delane of Bourne and like this bus one of two Dennis double-deckers supplied to Dennis in 2003 shortly before he sold out to Stagecoach-Manchester. Some say the later East Lancs products were rather ugly but I rather like oddities and no doubt some of the public thought they must have come from somewhere like Spain. Let's hope the new owner continues building buses and they don't suffer the same fate as Marshall.
Posted by christopher at 12:09