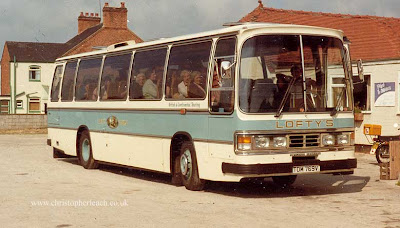 An important landmark at the very heart of traditional Stevenson country was the Salt Box Cafe and upmarket transport cafe which also catered for other travellers like the thirsty trippers on this rather smart Duple Dominant bodied Leyland Leopard of Lofty's Tours from the Deeside area north of Chester. Despite Hatton now being by-passed by the A50 the Salt Box Cafe is still there for truckers who don't mind going down the old roads nearby for a decent fry-up and a mug of tea.
Posted by christopher at 08:03