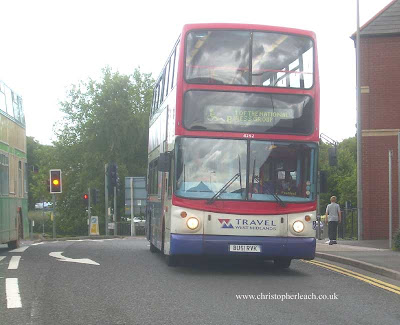 Today in Stafford we enjoy a fairly predictable diet of mostly Arriva Dennis Darts of different sizes and bodywork, but it is pretty dull fare compared to the old BMMO Midland Red days or even Chaserider and the others after Deregulation. For one thing although they do occasionally appear from Cannock the double-decker is not that common these days so I was put in the unusual position of having to stand in the middle of the road wondering whether to snap first a WMPTE Alexander-Dennis coming one way or the Leyland Titan coming up behind me. In the end I photographed both as the traffic was moving slowly due to the Rock Festival at Western Park. No doubt the M6 was so jammed up because it was taking people two hours to exit the M6 at Junction 12 to get on the A5. Previously Arriva had done the Western Park contact taking many of the 80.000 revellers this time from both Stafford and Wolverhampton Station, and even though Arriva could put on a good show which included things like training-buses it was nice to see and hear double-decker activity again.
Posted by christopher at 09:06