You can chop a tree down but you cannot kill Standerwick 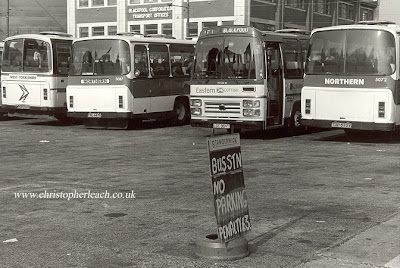 Once up on a time smart Ribble and Standerwick Coaches used to gather in the Coliseum Bus Station in Blackpool along with other local great local names like North Western and Lancashire United to yield their fleet numbers and impress their newness to young enthusiasts like myself. But the Coliseum too is now sadly a memory as is the old railway line that now serves as a temporary looking Coach Station as nobody cares much these days about pleasing budget coach passengers. Under the ownership of the NBC many of the old BET and THC bus companies kept their former titles at least but the great names of coaching quickly disappeared as with little regard for tradition and employee pride they were bundled together to form the faceless dreary whitewashed fleet of the original National holidays and National Express Coaches. A little reminder of Standerwick was the inspiration behind my taking of this line-up of coaches which still in the Eighties as before came down from Scotland and The North East and over the Pennines from Yorkshire.
Posted by christopher at 08:44