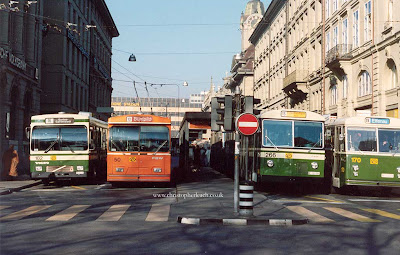 As well as catching four Bern buses in a row sitting in the winter sunshine, age wise they are standing exactly in ascending order going from left to right. No.182 the Ramseier & Jenzer bodied Volvo dates from the Eighties whilst the orange painted Hess bodied FBW No.50 dates from 1975 and the recently repainted FBW artic from about 1967-8 and finally No.170 of 1965. This was numerically the final bus of this large series of about 60 similar FBW buses that first entered service at the end of the Fifties. A late survivor together with others going into the Nineties was No.113 which dated from 1959. Naturally the oldest type was my favourite here and although one or two were still in all day service on my first holiday visit early in January 1990 on subsequent I usually had to catch them in the two daily rush-hours to get tape-recordings for my collection.
Posted by christopher at 07:02