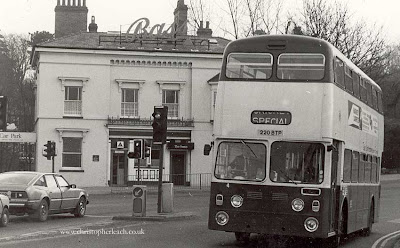 In the stupid Seventies when change for changes sake was all the rage with the new name of the local authority Burton Corporation became East Staffordshire. The latest buses too were a tad different from the conservative solid old maroon and cream crash-gearbox Gardner 5LW powered Guys and Daimlers of old. Roy Marshall the new General Manager had brought with him the slightly odd red, off-white and green livery that had been favoured at his previous post at Gelligaer in the Welsh Valleys. The fleet was updated too with vehicles more suited for one-person-operation including six MCW bodied Leyland Atlanteans from Portsmouth, buses that were also being bought by Stevenson's whose yellow and black buses were also to be seen in this the Midlands most important brewing town making the total tally nine. Appropriately a local product is being advertised at the Swan, a rather imposing Bass Pub situated at the far end of the Trent Bridge. These buses were purchased in 1975-6 and a couple of years later a small batch of new batch of East Lancs bodied Atlanteans arrived. Even though No.4 has it's OPO sign illuminated it looks as though the bus is actually carrying a conductress.
Posted by christopher at 14:28