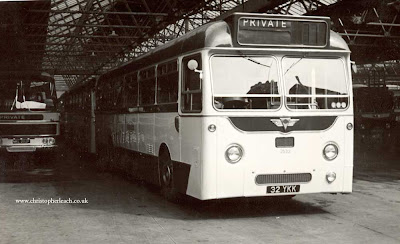 Not surprisingly Maidstone and District had a fairly large garage at Maidstone on a site shared with a Victorian building that was companies head office in Knightrider Street. My guess is there were about 60-70 vehicles allocated here. It was always worth a visit too for new vehicles were delivered here and it had an interesting varied selection of the fleets AEC, Daimler and Leylands. Should you ask me which ones spring to mind first it would have to be two Willowbrook bodied AEC Reliance 2U3RA which as part of M & D's first delivery of 36ft single-deck buses in 1962 (S1) and S2-5 1963 should have been S6-7. But Instead the last two arrived as SC 31-32 dual-purpose coaches for express work and were allocated here at least in 1967-8 when I studied in the town. In the background is a brand new Duple-bodied Leyland Leopard as at this time in 1968 much to the regret of many, M & D had transferred it's single-deck and coach loyalties to Leyland from it's traditional supplier AEC of Southall.
Posted by christopher at 06:43