Driver stop the bus, I want to go to the bank 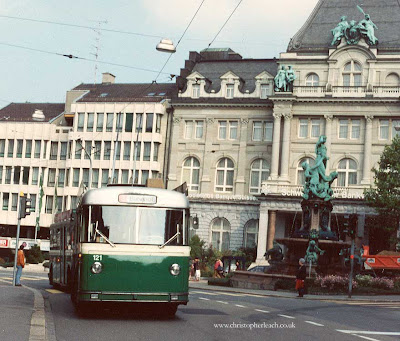 Yes believe it or not this is not the Town Hall or an expensive hotel it's the palatial Schweitzer Bank in St.Gallen dating from towards the end of C19 complete with feature-fountain draped in symbolist water nymphs. Presumably those customers with just ordinary accounts had to go through the tradesman's entrance around the back. I'm sure as a poor English tourist one would not be too hopeful of getting the best exchange rate here, probably better to follow my example and use Migros. Trailer pulling No.121 probably dating from the late-Sixties was photographed in 1990 not too long before these once attractive Saurer trolleybuses with attractive brightwork embellishing their fronts were withdrawn only to see further service abroad as was often the case with beautifully maintained former Swiss rolling-stock. By 1991 the trolleybus fleet here consisted of 29 articulated vehicles for the three routes and the oldest now dated from just 1984 so I was glad I returned to Switzerland in time to catch much of the old interesting stuff as it was rapidly disappearing.
Posted by christopher at 06:42

Unfortunately I missed the "old" days in St. Gallen. I also regret not having visited many of the other Swiss trolleybus cities while older buses were still running. Lugano was one of my favourites that I did fortunately get around to doing.

Fortunately for St. Gallen, the decsion was recently taken to retain the trolleybus system. The current fleet will be replaced by modern low-floor buses over the next couple of years (and will include some double-articulated trolleybuses as also seen in Geneva, Lucerne and Zurich). Whereas this is no doubt a good thing for passengers, it means we enthusaists have to say goodbye to "new" old friends yet again.