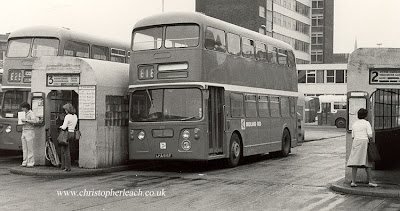 Outside Birmingham and the industrial Black Country the biggest centre of operations for Midland Red was Leicester where there were three garages. The busy St Margaret's Bus Station was the hub of the Leicester operations and as a youngster I was too excited by the buses I might see to notice the grim utility appearance of the horrible concrete bus shelters. However they did their job keeping out the wind and rain and should a nice new bus collide with them I know which would have come off worst. Half way through own built D9 production Alexander bodied Daimler Fleetlines began to appear and these became the standard double-decker for the fleet. One of the garages with about seventy buses was situated right beside the bus station in Sandiacre Street where this bus No. 6116was allocated along with 6115 and 6117. Under the NBC standards dropped and in the more watchful old BMMO-Midland Red days you would have been able to see that the bus was bound for Uppingham via Belton.
Posted by christopher at 01:34