Those Colours: Is it from Metrobus of Orpington? 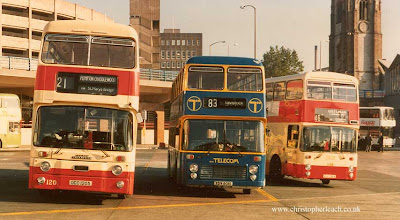 No I'm afraid it wasn't that attractive South London operator but unlike most all-over advertisement liveries on buses the one British Telecom employed on this Western National Bristol VR was far more attractive than the usual leaf-green still being used by former NBC companies at the end of the Eighties which can also be glimpsed in this photo. Also at Bretonside were two Plymouth Atlanteans showing the two styles of bodywork from Park Royal and East Lancs on it's later AN68 type buses.
Posted by christopher at 01:18