Premier Travel in a grey Hanley 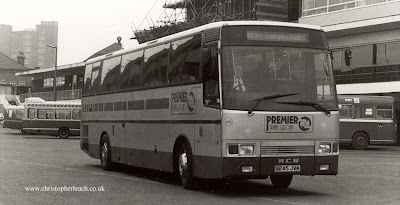 I wonder how many of you remember seeing the smart blue and silver coaches of Premier Travel which for a short time after deregulation became a common sight in Stoke on Trent when they came through working joint services with Yelloways of Rochdale. The Metrobus was such a great success for MCW it is easy to forget they built other models too apart from double-deckers including the purpose built Metrorider minibus and even a taxi the Metrocab. With the demise of the struggling Leyland Bus after it was bought out and dropped by Volvo, it's a pity that Birmingham based MCW didn't enjoy the same kind of success as Dennis as it certainly had the muscle. Sadly the single-deck coach version of the rather attractive Metroliner never really took off which was a pity as the second version of it was rather attractive, indeed it's simple lines still look remarkably crisp and pleasing today.
Posted by christopher at 15:02