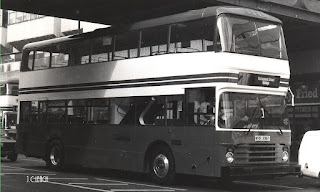 Nottingham was always innovating or trying new types. Indeed it was sometimes hard to keep up but despite being obviously one of theirs it certainly had a different look about it. But it was a bit special being a rare Dennis Falocon one of two fitted with East-Lancs bodywork 396-397 and tried alongside two of the Volvo Citybus with similar bodies 398-399. Obviously brand new 396 was seen in 1985.
Posted by christopher at 16:08