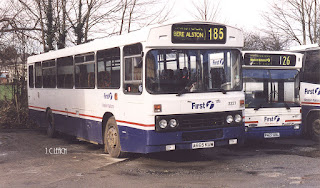 The Western National garage at Tavistock beside the bus station closed on 5th May1973 by which time it's dwindling allocation had shrunk to just ten. In BTC days it  had been about fifteen and the fleet at the end included two Bristol FLF's and RELLs,  the rest being smaller types like the SULA4 and LH. Usually one finds in most towns the bus population has shrunk but in the Nineties a new outstation was opened at Tavistock which held about eighteen buses which was more than in better times. I wouldn't call it a bus garage situated down a country lane beside the river it was basically a fenced yard with a portacabin which is the usual arrangement for First's various smaller outposts. Despite competition from Plymouth Citybus it managed to stay open and as far as I know it's still in use by Stagecoach. I think the increase in bus traffic in the area was due to better service levels into Plymouth and the expansion of rather desirable Tavistock on the edge of Dartmoor as a place to live. First shuffled it's spare buses around which made for some interesting local variety including this former West Yorkshire PTE Duple Dominant bodied Leyland Tiger A665 KUM from a batch of 23 Nos.1651-1672
Posted by christopher at 02:40