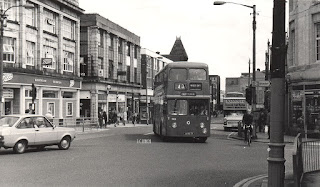 Of the early rear-engine Atlantean and Fleetline bodies I still find these Northern Counties examples the most pleasing, of course it looked even better on a Guy Arab of which Lancashire United had many as initially it only took small batches alongside them of these more troublesome buses. From the second batch of five instead of six this 1963 bus No.142 was seen in Bolton in 1979 or 1980.
Posted by christopher at 01:42