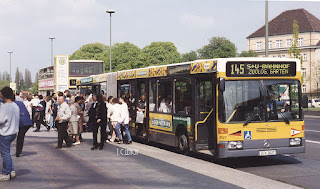 Traditionally most German town buses had been painted a rather indifferent shade of cream with perhaps some black lining out. But the age of Reunification brought fresh thinking and Berlin's BVG adopted this yellow, grey and white scheme which was obviously influenced by the similar liveries in Holland. It didn't look too bad either on this articulated Mercedes 0405G at Spandau unloading before making another trip back to the central Zoo terminus. Berlin has streamlined it's network and it might be easy for understanding taxpayers and commuters but they have cut bus services where they overlap with the U-Bahn and in later years there was no longer a direct bus service on this route which made it harder for tourists trying to get around on the buses.
Posted by christopher at 00:52