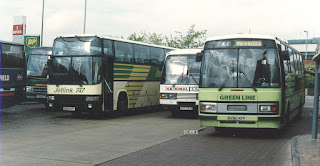 The Leyland Tiger was only in production for a few years compared to the stalwart Leopard but they were certainly common in later years within the NBC. Coaches used to gather at Heathrow as a transport hub as the airports became an important destination for Green Line in the London area and National Express. Here we have three makes of bodywork, first being the rather attractive Duple Laser of National Welsh whilst the Green Line Tigers have the most common Plaxton body whilst the Berkhof was rather more unusual and few would survive as most of these coaches were quickly rebodied following Deregulation and B108 KPF would become an East-Lancs bodied bus with Midland Red North.
Posted by christopher at 01:13