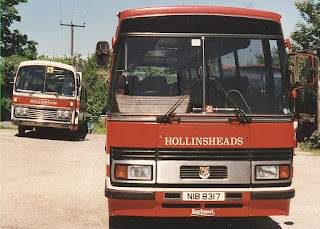 Hollinshead of Biddulph was one of the Potteries many interesting Independents. A coach firm rather than a bus operator, nonetheless it always ran a the odd AEC or Leyland as well as lightweights. A bit of a curse really as the re-registering of coaches means it's hard to decide where they came from, but Moseley of Barnsley rings a bell.  This Plaxton Paramount bodied Leyland Tiger dated from the early Eighties and would have been a Y or a A-C reg. Old Mister Hollinshead said he planned to remove the Leyland badge as 'trophy hunters' often damaged the grill trying to steal them. It's a sad old world sometimes!
Posted by christopher at 02:54