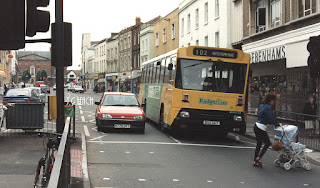 One of the first things the newly privatised  Badgerline did was to break away from the old order when it came to buses and signed a contract to supply a fleet of singles, double-deckers and coaches in it's Western-super-Mare area which included support. I don't know if it was a  success or not as it was not repeated again but despite their austere looks these P-type Alexander bodied B10M's were a good bus and a joy to ride on. Sadly Badgerline and it's sister Bristol City Line became one of the core companies of First Bus and soon took on that 'Barbie livery greyness'. D112 GHY was seen in Taunton in the rather attractive green and yellow livery
Posted by christopher at 16:12