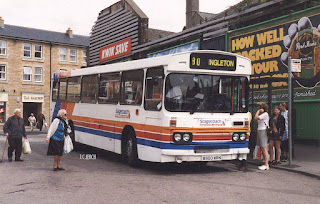 Perhaps it was because buses were becoming more mundane certain vehicles stood out as being different. Now belonging to Stagecoach this Duple Dominant Leyland Tiger had been unique in the Ribble fleet having originally been destined to be the tenth bus in a Midland Red North order. Apparently it was retained by Leyland to try out various modifications. With Ribble I remember it spent a lot of time around Blackpool but by now had to moved to Lancaster when it was heading for the wilds of Ingleton.
Posted by christopher at 15:48

Good to see that this vehicle has been preserved and is in Ribble NBC colours. Cracking picture.

Yes I agree Alan, but of course you mean in NBC Ribble colours. I have another photo of it in that NBC guise in Liverpool where it was often to be seen.