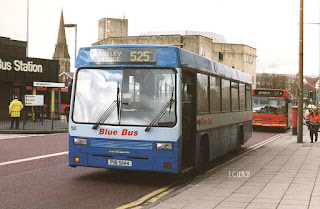 The pressures of Deregulation called for a lot of extra buses to flood the streets and cause mayhem. As the focus moved sharply away to busy urban work as opposed to longer coach based services a lot of these vehicles became redundant. Rebodying some of these brought in plenty of work for East-Lancs and as with this example with Blue Bus of Horwich a body from Willowbrook of Loughborough. For many of us the Loughborough manufacturer brings back many fond memories but like a lot of the British Bus Industry declined to the extent that it disgraced it's once proud name. These new bodies were usually put on still sound Leyland Leopard chassis and had a resemblance to the Lynx which also turned out to be lacking a lot when it came to quality. I guess otherwise some of the Leopards would have gone for scrap so at least cash strapped operators got some money out of them. Blue bus of course are one of the villains of the industry in the sense that they tried to run Fishwick's, the good guys off the road.
Posted by christopher at 02:17

Turns out this one has a quite fascinating history, having run for two municipal operators in previous life. It was new to Southend Transport in 1979 as a Duple-bodied coach. It was bought by Brighton Buses in 1988, but it was not until 1991 that it received the Willowbrook Warrior body. One source mentions that the engine was replaced by a more modern TL11 at the same time.
It seems to have run as a bus in Brighton for six years, before Blue Bus acquired it. In fairness, by that time, Blue Bus were also buying brand new SLFs - years before Stagecoach did so.

Thanks Shieldsman, to be honest I didn't know a lot about it's former history. Yes like Stevenson's who also expanded rapidly Blue Bus couldn't afford to buy too many brand new buses and they were not 'Amateurs' of course as I believe it was set up by former GMT managers. I would like them a bit more if they had retained that pleasant blue and cream instead of this cold blue and grey which was not a Derby winner either.